Assumptions about future behavior of shelter dogs seen as food aggressive are unfounded.

Animal shelters may conduct what they describe as behavioral evaluations of the dogs they receive, in order to discover what they presume will be problem behaviors when the dogs are adopted into new homes. Among the behaviors that evaluations are designed to detect are those labeled “food aggression.” The behaviors described by that term include growling, showing teeth, lunging, snapping or biting, when a person attempts to interact with the dog while it is eating, or to interfere with the food while the dog is eating.

Whatever the range of behaviors a shelter chooses to characterize as food aggression, the consequences for dogs so characterized have been serious. One survey of US shelters reported that food aggression was the most common reason for considering a dog unadoptable. Only one-third of the shelters surveyed made any attempt to modify food aggression behaviors and place the dog for adoption. More than half stated that they made no attempt whatsoever to place for adoption any dog that had shown these behaviors.[1]

The beliefs behind these life/death decisions are 1) that food aggressive behaviors in a shelter environment carry over to the new adoptive home; and 2) that adopters will not adopt and keep dogs that show these behaviors.

Both of these beliefs are incorrect, according to two recently published studies that were conducted using standardized evaluations.[2] A study conducted between 2004 and 2006 in Wisconsin placed into adoptive homes 96 dogs described as food aggressive,[3] providing the adopters with a protocol to help them modify the behavior.[1] Whether or not adopters followed the recommended protocol, and most did not, any assumption that the behavior would carry over to the new home proved incorrect. The food guarding observed in the shelter faded in the home. Within three days, a majority of the adopters reported that they could pick up the bowl while the dog was eating. By the end of three months, the adopters reported no incidents of guarding behavior, with the exception of one occurrence in one dog involving a rawhide.

A second study, published in the journal Applied Animal Behaviour Science (AABS), was conducted at the Center for Shelter Dogs (CSD), a Program of the Animal Rescue League of Boston (ARL), under the direction of CSD Director Amy Marder, VMD, CAAB.[4],[5] Dogs entering ARL are evaluated using CSD’s Match-Up II Shelter Dog Rehoming Program battery of tests. Dr. Marder and her collaborators at CSD interviewed owners who had had their dogs for at least three months. They wanted to know to what extent food aggression (FA+) that had been detected during a shelter evaluation was later reported by an adopter, or if dogs that had tested as not food aggressive (FA-) at ARL had showed food aggressive behavior following adoption.  To do that, they did not restrict their survey to owners of dogs that had tested FA+. They identified a sampling of dogs that had been adopted, some of whom had been scored FA+ according to Match-Up II, and some of whom had not (FA-). Was the finding of FA+ in the shelter strongly predictive that the dog would remain FA+ in its new home? Did a finding of FA- in the shelter mean that the dog would not evidence FA+ following adoption?

Neither question had a simple yes/no answer. Fifty-five percent of the adopted FA+ dogs were reported by their adopters as FA+ in the home. But not 100%. That left nearly half of the dogs that had tested FA+ in the shelter who did not, according to their owners, manifest that behavior in the home. In the changed environment, the food aggressive behavior had faded.

Seventy-eight percent of the dogs reported as FA- at ARL were reported by their owners as FA- in the home. But, again, that left 22% who showed food aggressive behaviors following adoption, though the dog had not shown that behavior at ARL.

The studies agree that, contrary to the beliefs common among shelters, food aggressive behavior is not a barrier to owners forming strong bonds with their dogs. The Wisconsin study reported that a lower percentage of FA+ dogs were returned to the shelter than FA- dogs. Dr. Marder and her group wrote that almost all of the adopters responding to their survey, whether or not they had adopted an FA+ dog, did not consider this behavior a challenge to their keeping the dog as a pet. Most of Dr. Marder’s respondents, whether or not their dog was considered FA+, reported that they would adopt the same dog again.

“The detection of FA+ via a behavior evaluation should be interpreted with caution”, Dr. Marder and her colleagues wrote, “since a positive finding in the shelter evaluation does not consistently indicate that the behavior will occur in the home or that the dog is unsuitable for adoption.” After all, suitability for adoption is in the eyes of the adopter.

Shelter evaluations may tell us as much or more about the effect of the shelter as they do about the individual dogs. Shelters are noisy, alien environments, filled with strange smells, unfamiliar people, and dogs they may hear, but not see. We should not be surprised that some dogs may guard life-sustaining resources in these circumstances. Dr. Marder cited a number of reports showing that dogs may behave differently when confined in a shelter, with its barrage of stressors that the dog cannot control, than they will in the safe, secure, predictable environment of a home, cared for by people with whom they are able to form positive attachments.[6]

Blanket assumptions about the future behavior of dogs described as food aggressive in a shelter, as well as about the suitability of such dogs for adoption, are unfounded. Rather than rely on blanket assumptions, shelters should trust to compassion, critical thinking, and common sense. “Each dog should be considered as an individual,” Dr. Marder and her CSD colleagues remind us, “and all behavioral and owner-related factors considered when making adoption decisions.”

[1] Mohan-Gibbons, H, Weiss, E., & Slater, M. (2012). Preliminary Investigation of Food Guarding Behavior in Shelter Dogs in the United States. Animals, 2(3), 331-346.
[2] It should be noted that both studies excluded dogs they considered to be extremely dangerous, although this was defined differently by each study.
[3] Food bowl guarding in this study was determined using the ASPCA’s Safety Assessment For Evaluating Rehoming (SAFER) assessment.
[4] Marder, A.R., Shabelanksy, A., Patronek, G.J., Dowling-Guyer, S., & D’Arpino, S.S. (2013). Food-related aggression in shelter dogs: A comparison of behavior identified by a behavior evaluation in the shelter and owner reports after adoption. Applied Animal Behaviour Science. Advance online publication. doi: 10.1016/j.applanim.2013.07.007
[5] Dr. Marder is an Advisor to the National Canine Research Council.
[6] For a discussion of the effect of confinement stressors on animals other than dogs, see: Morgan, K. N, & Tromborg, C.T. (2007). Sources of stress of captivity. Applied Animal Behavior Science,102, 262-302
Share on facebook
Share on twitter
Share on linkedin
Share on print
Share on email
PrevPreviousObama Administration opposes breed specific legislation (BSL)
NextCloning Shows That All Dogs Are IndividualsNext 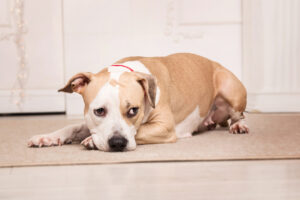